Thanks to my background (a former professional archaeologist), and my recent induction into the hallowed echelons of the Portable Antiquities Scheme (PAS) as a trusted self recorder I am invited to take part on exciting projects. One such occasion occurred recently, where I was asked to help out my friends at CAFG (Cambridge Archaeology Field Group), as they field walked a new site in a nearby parish.

A distinct pottery scatter had been identified, with shell tempered ware and general roman detritus in abundance over a complex of LIDAR discovered cropmarks. What was unique, was the constrained abundance of the scatter. The site started and stopped very distinctly in an area of approximately 20m2 .

Fellow detectorists will know what I mean next: I had that feeling…that anticipation…the almost certain knowledge that this was going to be a good spot…The first find was a childs silver finger ring (now inside the treasure process); next a fabulous sestertius of Marcus Aurelius in amazing condition…then more coins and then brooches placing the site in use between the 1st Century AD right through to the 4th …Yet I still had that nagging feeling…there was more, and better, to come.

What came up next took my breath away. An early Iron Age bucket mount !

These pieces are rare, especially with such a primitive style. The mount is in the form of anthropomorphic stylised human face on the head of a bull or ox, with side projecting horns.

The horns run across the forehead of the piece and an inscribed line curves between the base of each horn section for a length of 22.27mm. The right side measures 12.99mm from the side of the head outwards. The left horn is slightly more worn and truncated, measuring 10.11mm. Beneath the incised line between the two horns is an eyebrow ridge which measures 11.51mm in length and 1.81mm in width. Two close set eyes sit either side of a nose ridge. The eyes are 2mm in diameter and 1.8mm in depth, and 1.8mm apart. The nose ridge runs for a length of 9.29mm towards the mouth area. No mouth is apparent, however the chin of the face juts forward emphasising the human nature of the representation. The brow area extends forward 6.62mm from the rear of the piece, compared to the chin being 13.08mm forward.

The head is delimited by a neck area which measures 12.89mm in thickness. This area then expands to form two stubby arms which extend laterally from either side of the body. The arms extend 5.8mm from the torso of the piece. The arms measure 5.5mm in thickness at their base, but taper to end points, essentially forming pyramid shaped arms.

The torso of the mount has a concentric circle pattern inscribed upon it. Two inscribed circles surround a centralised dot. The larger of the circles measures 9.55mm in diameter. The inner circle measures 5.95 in diameter. The central dot, 1.62mm. The torso flares out slightly at its base before an area of iron corrosion is present. The iron corrosion extends a further 7.77mm at the front of the base of the mount, and 19mm up the back of the mount.

The reverse of the mount is flat and entirely plain.

But …there was more…within a few feet out came a beautiful gold stater. My first full stater, previously I had only been lucky enough to find a quarter stater.

So you see…doing things “right”…being helpful and being honest…opens up amazing opportunities…think on that my friends…and be a “good” detectorist.

Only 1 of 4 people in the EastAngian Region I am led to believe…Thanks to my FLO Helen Fowler and Sam Moorhead at the BM for their patience and training…you can see my first coin record here: 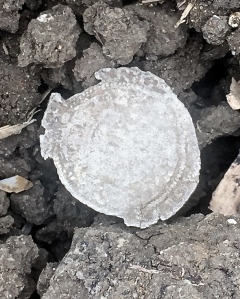 It was the turn of Bluff King Hal to be unearthed today….poor old Henry has had quite a life though. Nibbled, nadgered and gnarled …and clipped….but nevertheless its another Hammy from my new permission. From my research it seems to be a Tower Groat. These were actually struck after Henry’s death and into the reign of Edward VI. Incredibly light ((1.4g) even after it had been clipped: diameter 24mm) and of very poor quality of striking, you can see that the coinage was in a poor state of affairs during this period (1547-1551).

The coin can just be seen 3/4 of the way down the right hand side of the photo frame before my trowel comes in and tries to eek it out of its 700 year old resting place.

Next time I will try and film for longer and add some commentary, but I hope you enjoy the thrill as much as did yesterday.

Here are the other Hammies found that day. 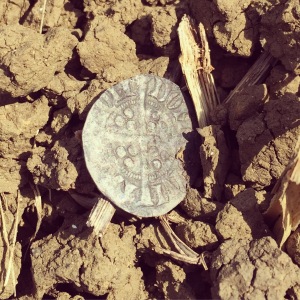 The WordPress.com stats helper monkeys prepared a 2014 annual report for this blog.

A San Francisco cable car holds 60 people. This blog was viewed about 1,200 times in 2014. If it were a cable car, it would take about 20 trips to carry that many people.

You go out to the same fields…. and according to the research there is nothing there….and to be honest you find a load of tat…day after day…week after week and then…these:

For the uninitiated left to right:

William I (The Conqueror) 1066-1087 – Weight 1.23g – Minted by GODRIC of London, somewhere between 1074-1077. EMC 2014.0277. Note Godric was a Saxon name. So William was still using Saxon moneyers for his coinage as his reign ended these important, prestigious roles went more and more to Norman/French moneyers and the Saxons names disappear. Fascinating….

So you see as the great Greavsie would say…it’s a funny old game….but my word when you strike it lucky ….its a beautiful game too…. 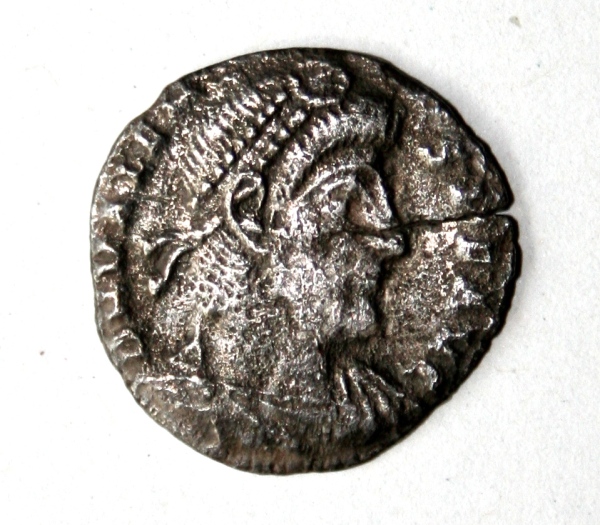 This time of year its frustrating knowing the permissions you have and the finds just waiting to be found…but it does give you the chance to research the finds you made in the previous season.

For example, below is a silver siliqua. Found in Harlton last year it is a coin from the Emperor Valens (AD364-78).

Looking at the mint mark it seems to be a rare occurence in the UK at least of a coin struck in Rome itself somewhere around 364-7. According to Sam Morrhead’s excellent book on Roman coins only two other examples of this have been found in Britain to date. There are probably more to be fair but just not reported to the Portable Antiquities Scheme (PAS).

On the obverse under the wreath section are two initials “R” and “Q”. These relate to the fourth workshop operating in Rome at this time. 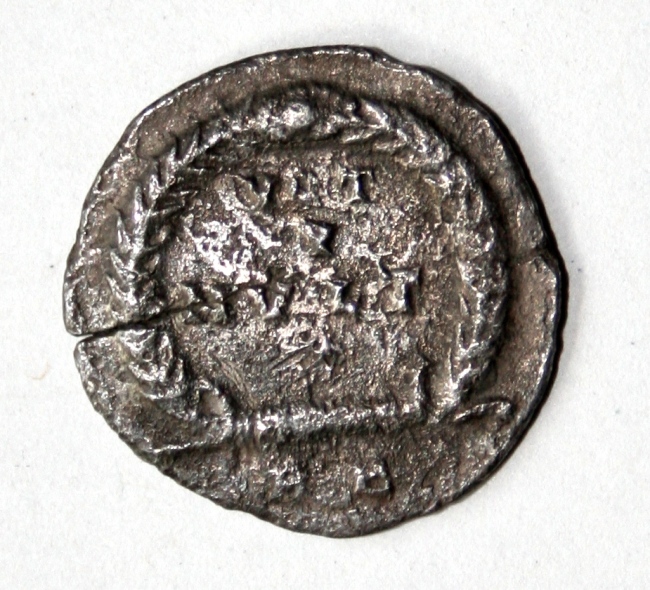 So you see even though you cant get out on the fields there is plenty you can be “finding” nevertheless! 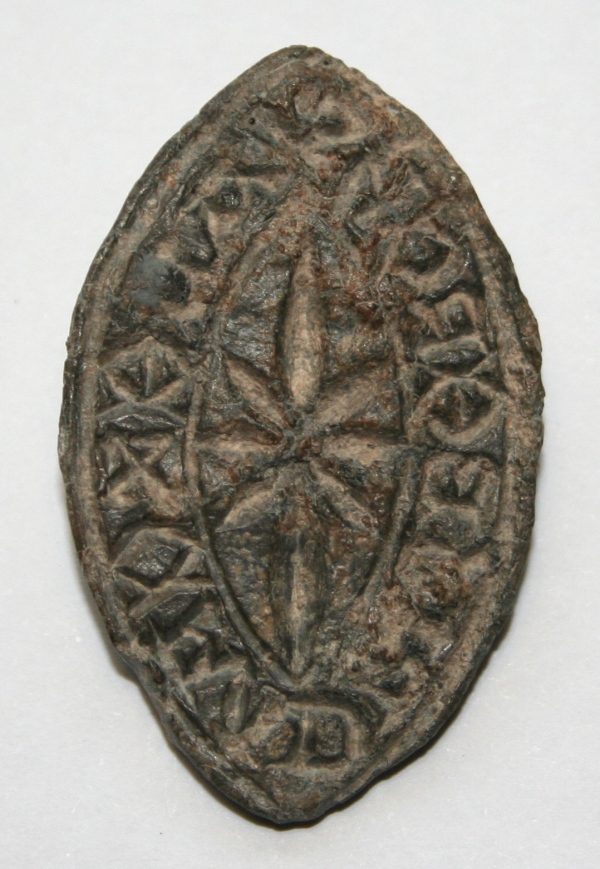 With everything under crop or water (!) at the moment I took the chance to visit some pasture I have permission on last weekend.I only had a couple of hours but had some good results….

First to pop out of the saturated clay was a lovely mid 13th Century vesica-shaped lead seal matrix. The intaglio device is an eight-pointed star incised into the central region. Unfortunately I have not got any wax or clay to make an impression so I cant decipher the legend. The back of the seal has a moulded-in-relief fleur-de-lys, and an integral lug at one end.

The next item rescued out of the sludge was of a very similar date was a lovely hand made thimble…it’s a thrill to pick something up that was lost 700 years ago and last sat on a peasants finger as “she” did her sowing….magical….

Then another object was unearthed – possibly a trade weight or an Apothecary’s weight…it is has unusual design on its face – cross lines run horizontally and vertically. There is then a heart shaped device on the vertical angle with two pellets in the dissected lower quadrants….I will research the device as it may relate to a old Harlton Family..

All of these were found in about a 20m squared area of pasture, its what we call a “sweet spot” in the trade….no Hammered coins yet…but with such domestic/commercial finds…you can bet they are there!

My first real evidence of 8th-9th Century Saxon activity in the parish…and what a little beauty this one is….

This is an Anglo-Saxon zoomorphic strap-end of Thomas Class A, Type 2 . The attachment end is recessed to accommodate the strap, and  has two rivet holes. The front of the strap-end is decorated with an engraved geometric pattern within a linear border. The terminal is in the form of a stylised animal-head with rounded rearward facing ears and a blunt snout. Overall condition is fine with a deep patina present. There may be evidence of silvering on the reverse but I am not sure…

Dshelleyic's Blog
Create a free website or blog at WordPress.com.